We Will Not Bow 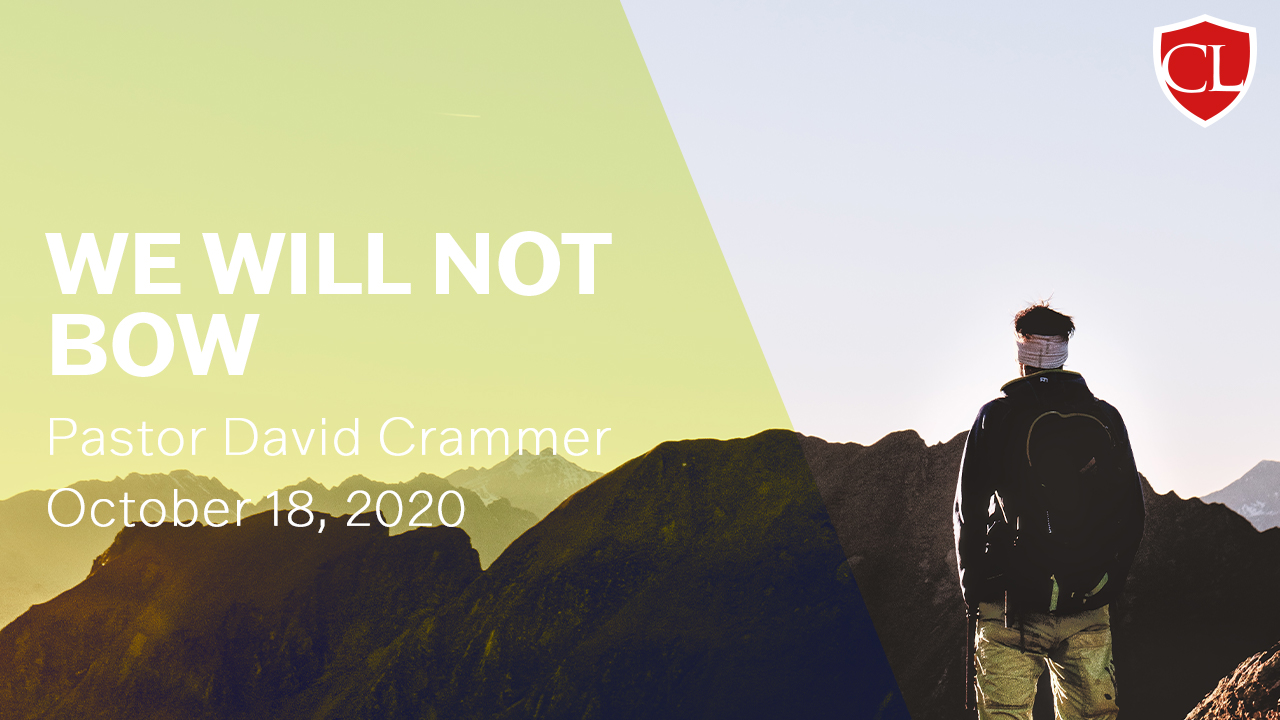 Nor do they light a lamp and put it under a basket, but on a lampstand, and it gives light to all who are in the house. 16 Let your light so shine before men, that they may see your good works and glorify your Father in heaven.

Have you noticed that we have lost our ability to have an opinion or belief without offending someone?

When the righteous are in authority, the people rejoice; But when a wicked man rules, the people groan.

If you want righteous laws in our nation, the righteous have to vote!

Blessed happy, fortunate, prosperous, and enviable is the man who walks and lives not in the counsel of the ungodly following their advice, their plans and purposes, nor stands submissive and inactive in the path where sinners walk, nor sits down to relax and rest where the scornful and the mockers gather. 2 But his delight and desire are in the law of the Lord, and on His law the precepts, the instructions, the teachings of God he habitually meditates ponders and studies by day and by night. 3 And he shall be like a tree firmly planted and tended by the streams of water, ready to bring forth its fruit in its season; its leaf also shall not fade or wither; and everything he does shall prosper and come to maturity.

I call heaven and earth to witness against you today, that I have set before you life and death, blessing and curse. Therefore choose life, that you and your offspring may live.

For if anyone is a hearer of the word and not a doer, he is like a man observing his natural face in a mirror; 24 for he observes himself, goes away, and immediately forgets what kind of man he was. 25 But he who looks into the perfect law of liberty and continues in it, and is not a forgetful hearer but a doer of the work, this one will be blessed in what he does.

On June 26, 2015 the Supreme Court took the position to redefine marriage between a man and a woman.

“While we celebrate today, our work won’t be finished until every American can not only marry, but live, work, pray, learn and raise a family free from discrimination and prejudice”.

Doesn’t affect you? Hillary Clinton advertised the fact that she intends to investigate ‘where people pray to see if they’re suffering ‘discrimination.

16 Shadrach, Meshach and Abednego replied to him, “King Nebuchadnezzar, we do not need to defend ourselves before you in this matter. 17 If we are thrown into the blazing furnace, the God we serve is able to deliver us from it, and he will deliver us from Your Majesty’s hand. 18 But even if he does not, we want you to know, Your Majesty, that we will not serve your gods or worship the image of gold you have set up.”

28 Nebuchadnezzar spoke, saying, “Blessed be the God of Shadrach, Meshach, and Abed- Nego, who sent His Angel and delivered His servants who trusted in Him, and they have frustrated the king’s word, and yielded their bodies, that they should not serve nor worship any god except their own God! 29Therefore I make a decree that any people, nation, or language which speaks anything amiss against the God of Shadrach, Meshach, and Abed- Nego shall be cut in pieces, and their houses shall be made an ash heap; because there is no other God who can deliver like this.”

if My people who are called by My name will humble themselves, and pray and seek My face, and turn from their wicked ways, then I will hear from heaven, and will forgive their sin and heal their land.

The Word became flesh and made his dwelling among us. We have seen his glory, the glory of the one and only Son, who came from the Father,
full of grace and truth.

Truth with no grace is like surgery with no anesthesia
Grace with no truth is like a bottle of prescription with no pills in it.