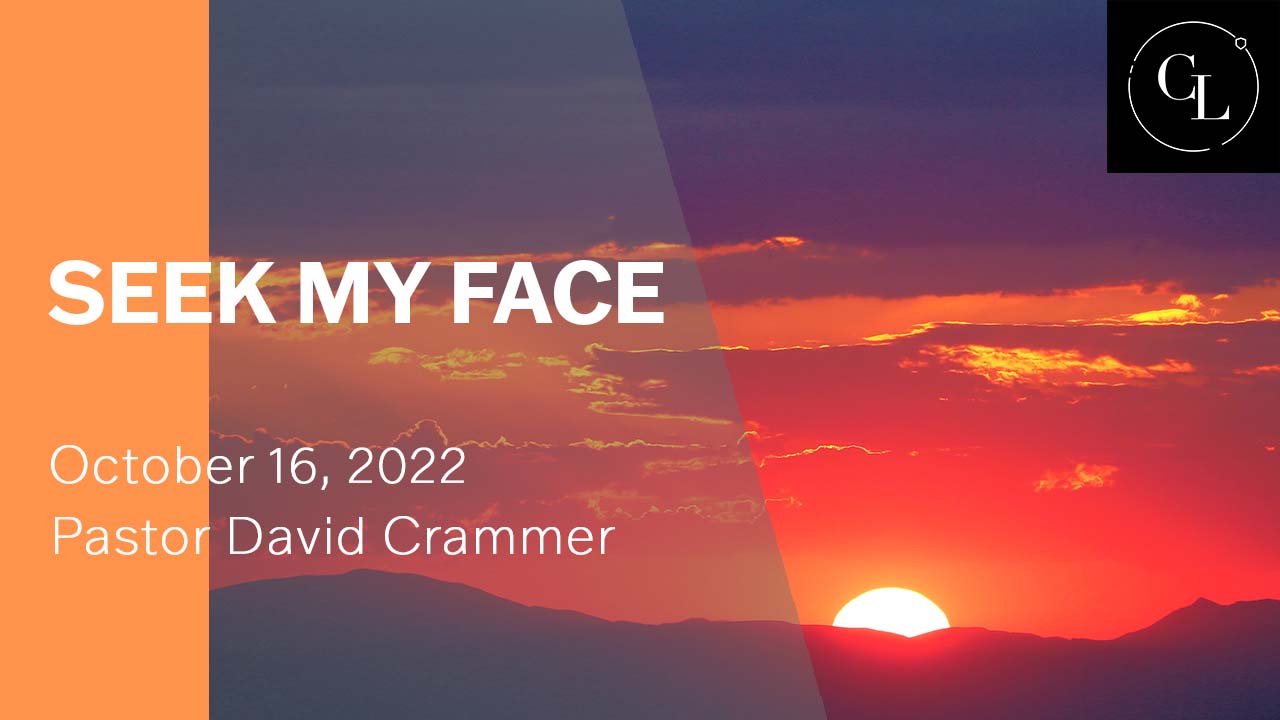 2 Chronicles 7:14 NKJV
If My people who are called by My name will humble themselves, and pray and seek My face, and turn from their wicked ways, then I will hear from heaven, and will forgive their sin and heal their land.

1. ONE THING I DESIRE

Psalm 27:4, 7-8 NKJV
One thing I have desired of the Lord, That will I seek: That I may dwell in the house of the Lord All the days of my life, To behold the beauty of the Lord, And to inquire in His temple.
Psalm 27:7-8 NKJV
Hear, O Lord, when I cry with my voice! Have mercy also upon me, and answer me.
8 When You said, “Seek My face,” My heart said to You, “Your face, Lord, I will seek.”

SEEK MY FACE – Hebrew: paneh/panim.
it is translated as face, but also as presence, surface, front, before and countenance.
Genesis 1:1–3 NKJV
In the beginning God created the heavens and the earth. 2 The earth was without form, and void; and darkness was on the face of the deep. And the Spirit of God was hovering over the face of the waters. 3 Then God said, “Let there be light”; and there was light.
Psalm 119:135 NKJV
Make Your face shine upon Your servant, And teach me Your statutes.
Genesis 2:7 NKJV
And the Lord God formed man of the dust of the ground, and breathed into his nostrils the breath of life; and man became a living being.
Numbers 6:24–27 NKJV
The Lord bless you and keep you; 25 The Lord make His face shine upon you, And be gracious to you; 26 The Lord lift up His countenance upon you, And give you peace.” ’ 27 “So they shall put My name on the children of Israel, and I will bless them.”
Proverbs 8:30–31 NKJV
Then I (Wisdom) was beside Him as a master craftsman;
And I was daily His delight, Rejoicing always before Him,
31 Rejoicing in His inhabited world, And my delight was with the sons of men.

3. WE REFLECT HIS GLORY

Exodus 33:9–11 NKJV
And it came to pass, when Moses entered the tabernacle, that the pillar of cloud descended and stood at the door of the tabernacle, and the Lord talked with Moses. 10 All the people saw the pillar of cloud standing at the tabernacle door, and all the people rose and worshiped, each man in his tent door. 11 So the Lord spoke to Moses face to face, as a man speaks to his friend. And he would return to the camp, but his servant Joshua the son of Nun, a young man, did not depart from the tabernacle.
Luke 3:21–22 NKJV
When all the people were baptized, it came to pass that Jesus also was baptized; and while He prayed, the heaven was opened. 22 And the Holy Spirit descended in bodily form like a dove upon Him, and a voice came from heaven which said, “You are My beloved Son; in You I am well pleased.”
Matthew 27:51–52 NKJV
Then, behold, the veil of the temple was torn in two from top to bottom; and the earth quaked, and the rocks were split, 52 and the graves were opened; and many bodies of the saints who had fallen asleep were raised;
2 Corinthians 3:15–18 NKJV
But even to this day, when Moses is read, a veil lies on their heart. 16 Nevertheless when one turns to the Lord, the veil is taken away. 17 Now the Lord is the Spirit; and where the Spirit of the Lord is, there is liberty. 18 But we all, with unveiled face, beholding as in a mirror the glory of the Lord, are being transformed into the same image from glory to glory, just as by the Spirit of the Lord